We made the 3 hour trip back to Rome. No worries Sorrento, we will return again someday.

Instead of a hotel we Air BnB’d it instead for the 4 days in Rome. Super proud of Mom for even knowing that was an option.

As with all of Italy, everything is a short walk, up stairs, and to the left… including our first floor flat, which was still up 2 flights of marble steps for some reason. END_OF_DOCUMENT_TOKEN_TO_BE_REPLACED

Our last night in Sorrento we walked the streets and shops.

The hotel has a shuttle that goes downtown. Our driver, ‘Lello is quintessential Italian. Terrible 80s pop music on low, devil may care attitude while driving, and pointing out the sites we passed, very nice, and all personality… but I understood 1 out of 3 words in English, Italian or whatever combination of both. (I’m pretty proficient in accents. I spent 6 years living downtown in the melting pot of Philly.) The driver gave us landmarks to use to find the meeting point, which we thought was past the orange trees near the mesh squares. It took us 4 days to realize he was saying “above the main square.”

My mom and I fell in love with Via San Cesareo the last time we were in Sorrento and it’s exactly how I remember it- charming and lively.

I always said when I win the lottery that my friends and family will know where to find me- there’s a little shop that does cameo carvings in shells. That’s what I want to do and where I want to stay. A girl can dream. Everybody’s family in Sorrento.

There’s a famous song, “Return to Sorrento.” The idea is that you hear the call of the sea, smell the orange trees, and enjoy enough that you never leave… or if you have to leave that you always come back. The meeting point stop for the hotel shuttle was directly in front of the hotel where my grandparents stayed when they were in Sorrento years ago. Funny how it’s the little details in life that come full circle.

Again with a great recommendation, we tried a tiny restaurant off of Via  Corso Italia, which is the main drag, Kebab Ciampa. It’s owned by two brothers who are colorful to say the least. I can’t fully explain in words how much fun we had at this tiny hole in the wall.

Its like the Italian equivalent of a cheesesteak- chicken or beef, your choice of veggies, and they bake the Italian bread in the shape of a pita. Molto bene!

When we sat down, the Italia vs. Spagna football game was starting. Not soon after we sat down, Italia scored their first goal. We were then told not to leave because we were good luck. Me being the crazy sports fan I am fully believes that. (It’s only weird if it doesn’t work right?) After we were done, Mom and I roamed the streets for a while and the boys stayed put to watch the game. Sports hype is universal, no?

We came back later after the 45th minute and eventually Italia scored their second goal! Apparently it was us that were the good luck charms. One of the owners kissed his miraculous medal and came running and screaming out of the restaurant. We laughed, we cheered, we quickly got out of the way for the crazy football guy to take a victory lap, all in good fun. Definitely an experience and we were glad to see Italia win.

…. Everyone else in Sorrento was too. Peaceful cheering after the game.

On a recommendation we went to Bar Rita in downtown Sorrento for cappuccino in the morning. The case of pastries and desserts looked amazing. I decided on a delicious lemon cake and cappuccino.

Dad’s on day 4 without Starbucks. No signs of caffeine withdrawal, doesn’t seem to miss whipped cream on top of his dessert/breakfast… but he is trying to optimize the pastry case for efficiency…

I think he’s learning to enjoy the cappuccino. When in Sorrento…

We started early this morning to take a shuttle, then a ferry over to Marina Grande in Capri. Once there we hopped another smaller boat to tour the rest of the island ending at the Blue Grotto. The gorgeous blue color is due to the refraction of the sun off the white sand at the bottom.

I know what you’re thinking, on land traffic may slow during rush hour, but surely at sea it would be fine, right?  Wrong.

The entrance to the Blue Grotto is 1m high (3.28 feet.) You need to take a four person rowboat to enter. During high tide the dock was busy so we waited just over an hour on the tour boat before getting a rowboat. It was worth the wait.

After we were done touring we stopped for a quick bite on dry land before heading back (by boat) to Sorrento.

After a long day we took the hotel shuttle downtown to eat. We heard good reviews for Il Leone Rosso. Glad we went. We had the option of a la cartel or prix fixe. My parents opted for the fixed menu. I decided to try the house specials the first course was a gnocchi and the second was a locally caught fish of the day. I still have no idea what it was. I know it began with a P and it was a white flaky fish similar to cod. Done perfectly. They brought the full fish out first (in case I forgot it was fresh,) then after it was cooked brought it back out (to show it was the same fresh fish,) then brought it out gutted and plated.

House desserts (cannoli and tiramisu) come with the fixed menu. The restaurant also brought out a round of limoncello on the house while we were waiting on the check.

… Then they brought out a second round of dark chocolate liqueur. We’re still not sure what was in it, but it put Godiva to shame.

We made it to day 2 in Sorrento. After carbo-loading for breakfast,(i.e. every pastry they offered us) the four of us along with our trusted driver, Giuseppe, took a day trip drive along the Amalfi coast.  We took a quick stop in Positano to take in the sights. The church we were hoping to see was closed for cleaning, so back to the car we went. 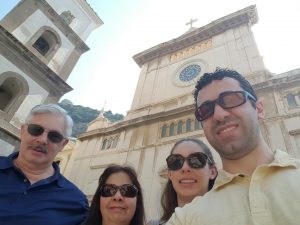 END_OF_DOCUMENT_TOKEN_TO_BE_REPLACED

After countless hours of being delayed in Philly we got another plane and made it to Rome.

Dad’s still in denial that there’s no Starbucks in Italy. Sorry, it’s the land of espresso…

From there we met Giuseppe, our driver, and made the 3 hour trip to Sorrento. The drive up the coast was wonderful. By the time we got to the hotel we managed to get something to eat (and meloncello as a nightcap) and settled it’s past 9pm. We start bright and early tomorrow morning so hopefully we’ll be refreshed.

I have high hopes to use this space to chronicle our travels for at least the next few weeks.

Packing’s done and we’re ready to go… well as ready as we’re going to be. I still have room in my suitcase so clearly I’m forgetting something.

But when she does it's usually about travel…